Last summer, London was ranked as the third best city in the world for attracting and supporting High Potential Women Entrepreneurs (HPWE), according to Dell’s 2017 Women Entrepreneur City Index. London was also one of the two European cities to make it into the Top 10 and this a trend that we are hoping continues throughout 2018. 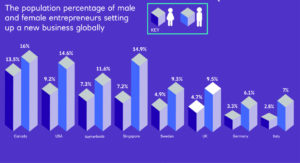 However, there is still much more work to be done to close the entrepreneurial gender gap with the UK scoring just 4.7%; according to research conducted by NatWest on the economic contribution of female entrepreneurs across the UK. In comparison, Canada tops the list with a score of 13.5%.

International Women’s Day (IWD) are leading the charge today with their #PressForProgress campaign as this years theme, giving a unified direction. In light of all this, we are celebrating 10 female entrepreneurs by highlighting their inspiring work, success and what they have achieved in their respective careers.

Anne is CEO and Founder of Starling Bank – the UK mobile only bank account – that is leading the exciting change in online and mobile banking in the UK. Anne has over 30 years’ experience within banking and payments working for RBS, ABN AMRO and AIB where she was responsible for catapulting the bank back into profitability.

Tessa is Co-Founder of Olio, the food sharing app that has developed a new digital marketplace and is saving thousands of food items going to waste every week. Over 400,000 items of food has been saved so far thanks to over 300,000 users and 13,000 volunteers.

Tessa also serves as a board member for Contentive – a global B2B media company and is involved as a mentor for Faster Capital as well as having a strong presence within the UK entrepreneurial scene.

Priya is founder of Century Tech and 2009 Business Entrepreneur of the Year. Priya is revolutionising the education sector by using artificial intelligence methods, big data and data mining techniques to improve students’ learning outcomes. The service is essentially built around helping teachers reduce their administrative overhead, like tracking grades and figuring out where to target their efforts with individual students.

Kate joined Blenheim Chalcot in November 2017 as CEO and has a special interest in Digital Healthcare. Formerly, Kate was CEO of Doctor Care Anywhere (a digital healthcare company), taking it from concept to operational global business. It is currently transforming the health care industry by becoming the modern family doctor.

Jenny has recently joined Dynamo Mortgages as COO, a collaboration between Blenheim Chalcot – the UK’s Leading Venture Builder and Countrywide the estate agency powerhouse. Jenny was previously COO at Habito before making the transition to Dynamo and has over 25 years’ experience in Retail and Commercial Banking. Specialising in change management, Jenny has overseen various projects and played a key role in Metro Bank’s lending operations.

Samantha is the co-founder of an award-winning start up based at the Bristol Robotics Laboratory at the University of the West of England – which develops low-cost bionic hands that look and feel good, for amputees or those born without a hand. The company won a $250,000 cash prize at the finals of Intel’s ‘Make it Wearable Challenge’ in 2014 and is now part of the Disney Accelerator, powered by Techstars. Samantha regularly speaks at international conferences, recently representing women in tech at events in Brazil, Russia and Singapore, and she has just been named as one of the Top 25 Women in Robotics You Should Know about by Robohub.

Reshma is the co-founder and managing partner of Seedcamp, a seed fund that backs European entrepreneurs who are solving problems using technology on a global scale. As managing partner, she’s overseen investments in more than 250 companies that have gone on to raise more than $1billion in additional funding.

Eileen is co-founder and one of four partners at Passion Capital (PC), a venture capital investment firm based in London, and currently sits on the board of DueDil, Digital Shadows, Mondo, VINAYA and other portfolio companies.

Eileen previously worked for Yahoo, Sky & Apple and is also the Chair of TechCity UK, an organisation that provides support and help for any digital businesses across the UK. She was made an MBE for services to Business in June 2015 and holds a BSc Engineering degree in Computer Science from the University of Illinois at Urbana-Champaign.

Marta is a loud voice in the FinTech space and is currently co-founder and general manager of Azimo – the app that enables faster, and safer money transfer across the world. Azimo has most recently launched in China and enables substantially cheaper transfers across the world, focusing on the migrant market.

Debbie is the founder of Love Home Swap, the home exchange service which was later acquired by Wyndham Worldwide. More recently, Debbie co-founded AllBright whose mission is to “make the UK the best place in the world to be a female founder”. In September last year, AllBright raised a further £1.8million to help fund expansion.

Debbie was awarded an OBE for her commitment and service for businesses and is a leading voice on the sharing economy we are experiencing today.